A friend wrote to me and asked me should he outsource or not. Turns out a number of startups confront this question in the early days. Especially if there are concerns with respect to delivering software on time and within estimates. My answer doesn’t vary much and is shared below.
—
Its unrealistic to expect an outsourcing team to have the same level of ownership and I believe that most conflicts arise out of mismatched expectations. Which is also why startups seldom choose to go down the outsourcing route if they have a choice to put together their own team instead. Writing software is a creative pursuit; its pretty challenging to get precisely what you ask for due to the lossy nature of communication.
I will always recommend putting together the best team over outsourcing. Let’s assume we’re going down the outsourcing route:
Do they want the business – yes? I’ll only recommend an outsourced company if I’ve either worked directly with them, or if a colleague I know well has worked with one. I don’t think an outsourced company will go out of the way to scam you on the project or anything like that as it will make an obvious impact on their ability and reputation to deliver to west coast customers.
Due to the language barrier / discomfort with western professional environments – you might find that when a project begins to fall behind schedule, some engineer will nod his head saying that a crucial task is complete, when in reality it isn’t. This has been known to happen and I don’t believe it is always indicative of malicious intent. Its more to do with our cultural make up. Here in India, professionals try to be over-sincere and don’t know when to say “no”. This attitude leads to icky situations where teams overcommit and under deliver. I don’t intend to sweep it under the carpet; but I can recommend that you need to watch out for this and proactively take steps against it.
Can an outsourced team make the difference between success / failure for a startup company? Success maybe. Failure – definitely not.
What you can do to mitigate some of the problems that can arise,
1. Start small (1 or 2 people) and build 1:1 relationships with the people on your team so that they have the freedom to focus on being productive.
2. Stick to an agile discipline with 2 week or 4 week cycles so that you don’t go astray and can get back on track when you do.
3. Be aware at the code-level as to what is being checked in, why, who, … . Peer code reviews are a great idea if you can get involved at that level. Hook your git repository to send out notifications on every check-in.
4. Keep communication voice-based as far as possible; this way you can bypass the language barrier and create healthy, direct communication lines between you and each member of the team. Try avoiding the tyranny of email if you can.
Over time, you can ease back on some of the above practices.
Finally, it pays to become the CTO for your product. I doubt if junior developers can help point out some of the larger arcs that could actually play a crucial role either in,
1. your product, the technologies used and eventually the ability to deliver on your business goals.
2. your team’s productivity, the tools used internally to help foster collaboration and efficiency.
If on the other hand you don’t have the bandwidth for the above. I’d say put your time and energy into creating clear specs and if stuff does go wrong I’d go back to what I said earlier that it isn’t the outsourced vendor who will determine success / failure of the startup. You always reserve the option to move on. That’s the nature of the relationship.
A side note, I have heard of people having better success with hiring talented freelancers from the odesk / elance crowd. Again this is anecdotal and your mileage can vary … wildly :).

END_OF_DOCUMENT_TOKEN_TO_BE_REPLACED This letter is greatly inspired by Dalton Caldwell’s open letter to Mark Zuckerberg and is aimed at making a corrective impression with those who drive the M&A in technology companies across India. This is an opinion letter written by me based on my experiences of over 6 years as an entrepreneur in the Technology and Internet space in India. I have only the entrepreneurs perspective to offer. But I do believe my experience and views will matter to you, especially if you are in any way connected to or affected by MnA’s of startups. This was not my first conversation around acquisition, I’ve had several in my journey. The funny thing is this story repeats itself every time. In fact, several entrepreneurs who read this post relate to it with their own stories which follow this pattern. Enough that we might even call it a broad trend.

A couple of months ago I was invited to meet with different executives of a potential acquirer with the purpose of acquisition of a technology that I’ve created. What we were selling was strategically ‘aligned’, could potentially expand the acquirers business, get  them to-market significantly ahead of time, and in turn solve a valuable business problem for both.

END_OF_DOCUMENT_TOKEN_TO_BE_REPLACED

Cricketing History has been made!

It was incredible to watch Ishant Sharma nail Ricky Ponting and push the Aussies on the back foot. He is only 19 years old! The Indians played methodically and kept the pressure on the Australians in the morning as well as through the afternoon session.

Here is the famous conversation between Kumble and Sehwag over persisting Ishant against Ponting. Ishant had already bowled 10 and Kumble was about to pull him out of the attack.

Kumble then asked Ishant, “Ek aur karega? (Would you bowl one more?).”

END_OF_DOCUMENT_TOKEN_TO_BE_REPLACED

Fabulously! A number of users left comments talking about how great the car was. However, on closer analysis – I found that some of the comments were fudged. Looks like Skoda has hired an online marketing firm to go plant comments trumping up the cars features.

Here are the best comments from my earlier blog post discussing the Fabia’s launch in Pune, thank you for your comments and your attention!

Rajan Khanna: Some useful info on Fabia that I got it:
END_OF_DOCUMENT_TOKEN_TO_BE_REPLACED

The buzz in town is that the hot little Skoda Fabia is about to step out into the big world right here in Pune in 7 days from now.

What is this post doing here? It only started out as a tribute to a great looking car I aspire to own. However, the comments have been insightful, from people arguing about the price to the delivery schedule (apparently, deliveries start in June 2008). 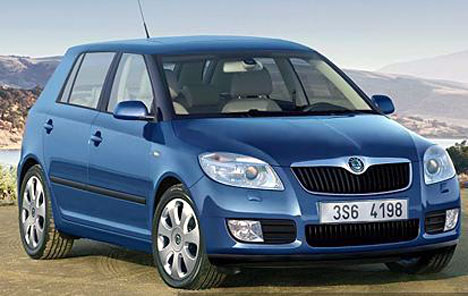 This is my recount covering the events of the Barcamp Mumbai 2, October 14th. Unfortunately, the post remained a draft for a while as more urgent concerns took over.

A recommendation to all organizers of future Barcamps – if you ever think of possible venues, give highest priority to an academic venue. IIT Powai lent an almost incredibly romantic and truly academic atmosphere to the Barcamp.

The web idea of the day goes to Vakow.com! They have taken an incredibly simple concept and built it for the web. If you love SMS forwards, you know the ones that go “neeche mat dekh, upar dekh” etc. you will love Vakow. Vakow is the single largest database for all types of SMS forwards. Yes, they will even preserve your white space.

What I really enjoyed was the attitude the founder members displayed when demonstrating their product. They are totally committed to having fun all the way and are unfazed by the idea of someone bigger than them invading their space.

Vakow had an exclusive in store for the campers, they are all set to launch an absolutely killer feature for their users soon. Unfortunately, I am not at liberty to discuss the feature. Visit their site to check if they have an update.

Other startups that get an honorable mention,

UPDATE I – Vakow was also featured on Economic Times “Advertising the most popular revenue model for Internet Biz“.

AirTel recently revealed a slick new ad for Pink Floyd ringtone downloads. Certainly made me turn my head! The advertisement features Pink Floyd’s famous “The Wall” soundtrack with a backdrop full of animation sourced from the original Pink Floyd concerts.

Marketing messages that cut through the noise are the ones that also come to you in your sleep.

For all ex and present students of the Bishops School ,Pune who have fond memories of our Alma Mater!!

You know you are a true Bishopite when: